I never had the pleasure of meeting Mia, but I know she was a loved member of Danny’s Texas family. When Danny contacted me a short time ago wanting to create a portrait of his Mia, he had pictures of her as a young puppy and one taken as an adult when she was swathed in comforting blankets and fighting her illness.

Danny and I decided to create a portrait of Mia that captured her at two stages of life – as the young puppy Danny first came to love, and as the adult companion whose time of sharing her life and love with him was nearing an end. 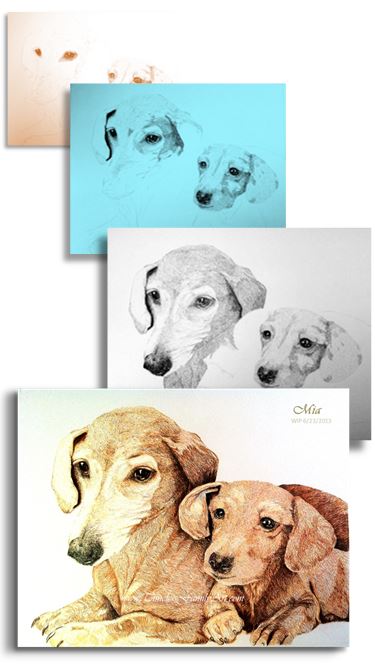 When God had made the earth and sky
the flowers and the trees,
He then made all the animals
the fish, the birds and bees.

And when at last He’d finished
not one was quite the same.
He said, “I’ll walk this world of mine
and give each one a name.”

And so He traveled far and wide
and everywhere He went,
a little creature followed Him
until it’s strength was spent.

When all were named upon the earth
and in the sky and sea,
the little creature said, “Dear Lord,
there’s not one left for me.”

Kindly the Father said to him,
“I’ve left you to the end.
I’ve turned my own name back to front
and called you dog, My friend.“

Our love to Danny and Mia.